Ceylon cinnamon from dmBio is a versatile spice. The aromatic cinnamon powder is made from ground organic Ceylon cinnamon. To round off tea, fish, meat or sprinkled classically over semolina porridge – the delicious spice is a real all-rounder. Let yourself be inspired by the organic cinnamon and refine all kinds of dishes.

MAY CONTAIN TRACES OF PEANUT, GLUTEN, ALMONDS, MILK, CELERY AND MUSTARD.
Keep in a cool, dry place, away from direct heat and light.

There are no reviews yet. 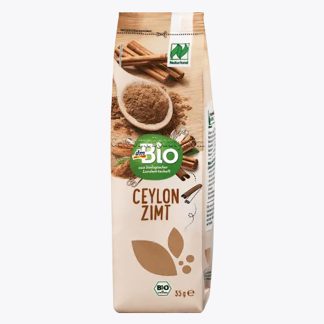